A socialist MP, Malek Boutih has just scared everything out of his fellow socialists. In an interview he declared that Marine Le Pen was going to be the next president of France. It’s done, finito, fait accompli. Is he right though? Should we get used to a “President Marine Le Pen”? How far is the presidency from her reach?

For most Frenchmen, Marine Le Pen will never win the presidency. It’s impossible to imagine: most think that the community of the Republic would never elect a president who has been considered as out-of-system, radical or even racist. But the electoral results of the National Front and recent opinion polls tell quite another story. According to those numbers, Le Pen might as well win one of these days. If not in 2017, then in 2022 or 2027.

Hollande and Sarkozy wants Marine Le Pen in the 2nd round 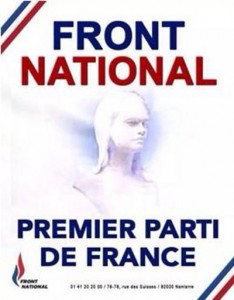 The FN says it’s the first party of France. Is it?

Secretly or not so secretly, everybody wants the leader of the National Front to finish the 2017 first round in 1st or 2nd position and qualify for the second round.

As for the Socialist Party: though the incumbent president conditions his reelection bid to some economic statistics being better, it is widely known that François Hollande wants to run again. And if he runs again, he obviously wants to win again. Some speculate that to win, he would not hesitate to help the National Front and its candidate – as his predecessor, François Mitterrand did in the 80s.

The reason behind this speculation is the fact that Hollande should know that his best chance to win – is a 2nd round between him and Marine Le Pen. (If he had to face Le Pen, he would be able to call for a “Republican rally”, secure his left-wing base and even get votes from right-wing electors.)

Nicolas Sarkozy’s Republicans hope for the same thing: they hope that their candidate, whoever it will be, will have to face the extreme rights’s candidate in the second round of the 2017 presidential election. Thus, to sum up, both “big parties” wish to push the other out quickly and win effortlessly against the far-right leader.

In all scenarios though, the future Republican candidate and Hollande himself need to create order in their own camps. They need Marine Le Pen in the second round, but they also need to make sure that their camp is united enough for them to have the votes to qualify for the second round (just to remind those who are not familiar with the French electoral system: the two candidates winning most of the votes qualify for the second round). Granted, there are some observers, like Jacques Attali, who think that “the race for the 2nd place” might just be the thing to secure the presidency for Marine Le Pen (because she is the only one to race for the 1st place…). The common basis of these campaign plans is the assumption that Le Pen would never be able to pull it off in the second round, because French Republicanism is so strong that the majority of the electorate would never vote for her. But is it so sure?

Most opinion polls seem to agree that Marine Le Pen will WIN the first round of the 2017 presidential election. The Republicans and Hollande’s socialists fight only for the second place, and according to their logic, for the presidency.

But opinion polls also say that Marine Le Pen is not losing in all scenarios. For example, a 2014 poll showed her beating the incumbent in a humiliating manner (54% vs. 46 %). In all other scenarios the Republican candidate beated Marine Le Pen – but this poll suggested that the common assumption of she-could-never-win should sometimes be questioned at least by the Socialist Party.

The sort of the presidency depends on the environment as well

On the other hand, Le Pen’s capacity to win (if ever) depends not only on the weaknesses of the others, but also on herself, on her party and on the future of the European political environment.

Here are a few points to consider:

President Marine Le Pen? Possible, but not so sure.

That said, theoretically, a President Le Pen might be elected in France, though the game is not played in advance. Much depends on her work and on the adversaries work in the future. But if she is elected, it will be not only because of French domestic politics, but also because of European and world politics.

The European political environment might be Marine Le Pen’s best friend in the coming years.

Have you forgotten something? Connect with me on Twitter and subscribe to the RSS-feed of this blog so that you don’t miss out on new posts!