Former French President Nicolas Sarkozy detained for questioning, Sarkozy charged with corruption, Sarkozy might go to jail, his political comeback is in danger – just a few of the news items that you might have read in the last few days. But what really happened here, what is the point of this new corruption case, and what are the real implications? A few words about the (newest) Sarkozy affair.

1. In the beginning, there was the Bettencourt affair. This is another corruption / illegal campaign financing case that I will not present in details here (I will tell you however, that Sarkozy managed to save his hide in that one). This new corruption case, though, is directly linked to the Bettencourt affair: according to charges, Sarkozy, together with his lawyer, asked a judge to give him inside information about the Bettencourt probe and promised him a Monaco job in return. Sarkozy walked right into the trap: according to news sources, his calls were being tapped by police when he tried to use his influence to his advantage.

2. There is an important consequence to this: public authorities might not use these calls in court, because they were recorded in relation with another case. The defence of Mr. Sarkozy will surely contest the legality of these exhibits during the whole process. Similarly, they will argue that it is illegal to listen in to discussions of a lawyer and his client because of the client/lawyer privilege.

3. Some soures say, however, that further evidence might exist, as many perquisitions took place during the last few years in offices related to the former French President. That means that charges might be well-founded, even if the phone calls are thrown out of the list of evidences. This might be the most important question that one might ask concerning this corruption case. 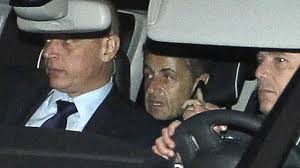 4. Of course, this proces, again, will cost Sarkozy a lot of money, and he will lose a lot of time in court as well. That is, if the case goes to court. But if it does go to court, it might happen right in the middle of the 2017 pre-campaign – should I detail the possible political consequences of such a timing?

5. The real political price of this corruption scandal might come later. After the Copé affair, and the resignation of the party president, the right-wing UMP is in ruins. Up until last week, it was almost sure that Sarkozy would decide to come back to make order in the party and to run for President in 2017. Will he have to change strategy?

6. If the UMP is unable to present a strong leader, Marine Le Pen, the President of the National Front might be the winner of the situation.

7. Nicolas Sarkozy, in a televised interview, decided to victimize himself, and promptly attacked the justice system and his political opponents for playing political games. He also made it clear that he intended to come back. A few months back, in a letter, he already stated that if “he is not left in peace”, he would want to come back to take revenge. This corruption case might just push one last button…