A heavy diplomatic agenda, with Ukraine in focus

After the contested Crimea referendum, the situation in Ukraine is expected to remain in the forefront of European diplomatic efforts. EU foreign ministers are to meet in Brussels on Monday, while Laurent Fabius, the French minister of foreign affairs is to visit Moscow on Tuesday. A European Council meeting is scheduled for Thursday and Friday, so it is almost certain that European leaders will grab the opportunity to discuss the Ukraine issue as well (according to the draft agenda “in the light of events, the European Council may address other specific foreign policy issues”).

Due to the heavy air pollution that has been plaguing the city, alternate driving days are introduced in Paris, while public transport remains totally free. The alternate driving scheme might be prolonged if necessary according to PM Jean-Marc Ayrault. As we are in the last week of the municipal elections’ campaign, this might become an important campaign issue. (Opposition politicians are already criticizing the decision as hasty and unprepared.) 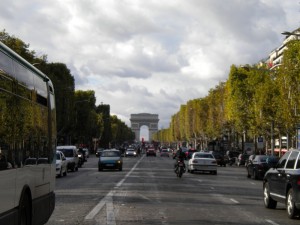 Fewer cars, more public transport: this is the prescription for Paris. The debate might affect the municipal elections’ campaign.

The last week of the municipal elections’ campaign

As parties and candidates prepare for the vote, one might already address the possible consequences of the municipal elections. Will socialists be able to keep Paris and other symbolic, bigger cities? Will Marine Le Pen’s Nation Front gain terrain? Will President Hollande feel the need to reshuffle his government even before the May European Parliamentary election? If so, will PM Ayrault stay in office? We will know more around 7 P.M. this Sunday, however, the picture might not get completely cleared up until the evening of 30 March, that is the evening of the second round.

Agenda of the week

For a detailed agenda of this week’s political events, click on this link: theweekinfrance12-2014.