A few weeks ago, French Senate lawmakers adopted an amendment to the so-called Macron law that would force Google to advertise three of its competitors on its site and on its search results page. This is not an amendment likely to enter into force, as the government opposes it, nevertheless, this is a remarkable new battlefield of the French war on Google.

First of all, let us note that this amendment is voted in a context when multinationals (including Google) are constantly attacked because of their legal or semi-legal tax avoidance practices in Europe and in France.

Many multinational companies do not have their headquarters set up in France. They provide services (like selling ads and content) from elsewhere, avoiding the local legislation and paying their corporate taxes elsewhere (European Union legislation indeed allows multinationals, in some cases, to pay their corporate taxes elsewhere than in the country of service). In the case of Google, for instance, the company is located in Dublin, because the level of corporate tax is notoriously low in Ireland. Other companies use Luxemburg as location for headquarters (these countries and cities are well-known legal tax havens: companies often negotiate their tax-levels beforehand with authorities, through the semi-shady system of tax rulings. The recent debate about the Luxemburgian system of tax rulings, a.k.a. the Luxleaks debate, directed attention to this phenomenon quite impressively).

Anyway, it is fairly evident that the status and the international tax optimization tactics of multinational companies like Google have been bugging French lawmakers for quite some time. In the framework of this debate, for instance, French tax authorities say that Google owes France more than 1 billion euros  in taxes – they consider the international corporate structure of Google as a system designed in order to avoid and/or evade French taxes. No wonder that the company is not in the good graces of French lawmakers.

What does this currently voted Senate amendment require? It not only forces economically powerful search engines (=Google) to advertise three competitors on their homepage, they are also obliged to give some information about the way they index and rank pages. The goal of this rule is to ensure that search engines do not favor their own services in said rankings (however, they are not forced to publish the search engine algorythm altogether – all search engines consider that as their intellectual property). Finally, one should note that fines, in case of non-compliance, are astronomical: 10% of the company’s global profits (!). 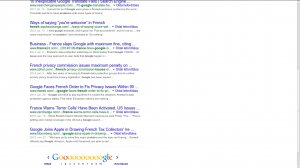 Google search results as seen now – would a Bing link affect you that much?

However, French lawmakers misunderstand the market advantage of Google in France and elsewehere. People who use this search engine do not use it because they do not know Bing or Yahoo!, they use it because the integrated services of Google suit their needs better. So, even if Google is forced to advertise its competitors, that won’t change much. Just so we understand what really is at stake: 9 out of 10 searches use Google.

These most recent French steps are part of a bunch of European regulatory actions against the U.S. tech giant, including the European Commission’s antitrust investigation. If something, the latter is of real interest for the company and for users.