Valéry Giscard d’Estaing, president of France between 1974 and 1981, has often been considered as too artistocratic. Nevertheless, I think he knows his people very well. I have just finshed his 2000 book called Les Français. Réflexions sur le déstin d’un peuple (The French. Reflections on the destiny of a nation), and it proves that this man, who is close to 90 and is still very active politically, has read a lot, thought a lot, and still can say relevant things about the French.

As far as I know, this book has no English traduction – so it might be interesting to give here a concise list about the most interesting topics that Valéry Giscard d’Estaing discusses in his work. (This is a subjective list, evidently. But still, it is very educating and I intend to offer it as a teaser, as an incentive for you to read the whole book!) 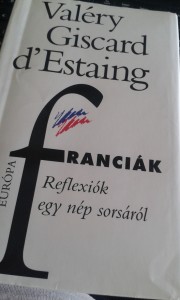 If you want to know the details, I highly recommend this book: details, history, sociology and culture. It’s all there, and it helps you to come closer to the reality of contemporary French politics.