Consider this: in his famous article called the Four Faces of Global Culture, sociologist Peter L. Berger described four facets of globalization: 1) Davos Culture (the rise of an international business elite ); 2) Faculty Club International, that is the internationalization of Western intelligentsia; 3) McWorld Culture 4); and finally, Evangelical Protestantism. It is not difficult to see that France and the French do not necessarily fare well in either of these categories. 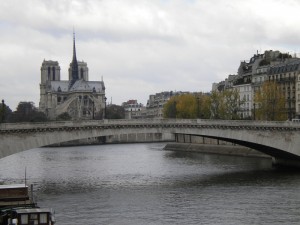 Notre-Dame de Paris: one of the most beautiful monuments of France

Values and languages: English, French and their messages

To add injury to insult, Berger declares that, even if it “enrages” some francophone intellectuals, English has become the koiné (the common language) of the globalized word, and that English carries the the predominant values of our era. He says: “Every language carries a freight of values, of sensibilities, of approaches to reality, all of which insinuate themselves into the consciousness of those who speak it. It makes sense to assume that the attractiveness of English, especially in its American form, is due at least in part to its capacity to express the sensibilities of a dynamic, pluralistic, and rationally innovative world.”

What does the French language carry as value? The Enlightenment? Voltaire? Rousseau? The power and the beauty of argumentation ang logical thingking? Ce qui n’est pas clair, n’est pas Francais? It is possible. But in fact, it does not matter that much. French culture, though it has been a leading culture phenomenon throughout the centuries, currently, like it or not, is a minority culture in the era of globalization. France, for now, fails to lead in the globalized world, even if she still has her influence spheres in Africa and elsewhere.

French bashing as a symptom of globalization

And according to the French perception and interpretation, contemporary France is very much a victim that is not respected and that is attacked unfairly, as if France was a sophisticated, well-mannered and civilized 13 year-old in the schoolyard, bullied by an older, stronger, yet dumber 17 year-old.

Now, are these attacks unfair?

If they are, how and why? If not, why? I’ll be discussing all this in an upcoming article to be published here on www.sooseszter.com.

Until that, make sure that you subscribe to the newsletter below and that you check out this one about the relationship of the late General De Gaulle and the Anglo-Saxons.